Palm oil is an edible vegetable oil derived primarily from the African palm. It is a common cooking ingredient in the tropical belt of Africa, Southeast Asia, and parts of Brazil. Due to the limited expansion abilities of oil palm plantations in many regions of the world, it is important for growers to have a healthy, high producing crop to depend on for many years.

This task becomes more difficult however as plant pathogens, poor soil structure, and overchemicalization affect the lifespan and quality of oil palm plants. After realizing the extent of these concerns, BioFlora became actively involved in several trials to determine if our sustainable approach to agriculture could help mitigate decades worth of damage, and begin rebuilding the health of many oil palm plantings.

Our scientists, with over 40 years of hands-on expertise, were consulted in these trials, which spanned three different countries: Colombia, Guatemala, and Indonesia. Each country had some specific, as well as overlapping issues, that needed to be addressed throughout the trial. Based on these issues, BioFlora recommended a sustainable program that would best suit their needs and their particular set of environmental conditions.

The objective of this trial was to suppress the advance of two plant pathogens: Phytophthora palmivora and Fusarium solani in mature African oil palms. BioFlora also worked to accelerate the recovery rate of already infected plants.

BioFlora applied Humega® and Fulvex® as a soil application and BioFlora Seaweed Creme® as a foliar. The control plot utilized a standard conventional fertilizer program.

Humega is a biologically enhanced humic acid, which facilitates soil tilth and boosts microbial activity. It enhances root protection against disease by stimulating the growth of beneficial microbes.

Fulvex is an ionic, increasingly bioavailable, form of fulvic acid which assists with higher yields even when using less chemical fertilizer inputs. This is possible as the product effectively transports nutrients and other macro and trace minerals directly to cell metabolic sites.

BioFlora Seaweed Creme begins with a type of hand-harvested, sun-dried Ascophyllum nodosum. This seaweed is homogenized, processed at ambient temperatures, and then enhanced within our patented organic process. This procedure secures all of the natural, beneficial qualities of seaweed (amino acids, vitamins, auxins, gibberellins, folic and folinic acids) in order to stimulate increased flowering, fruit set, and fruit cell density for better quality produce.

Phytophthora palmivora causes bud-rot of palms, fruit-rot, or kole-roga of coconut and arecanut. These are among the most serious diseases caused by fungi and molds in South India. It occurs almost every year in many regions, including: Malnad, Mysore, Malabar, and Kanara.

Fusarium solani is a filamentous fungus that remains the most common disease-causing fungus in its genus. Its spread has grown worldwide and is known to cause damping-off, corn rot, fruit rot, root rot, and surface rot. The common hosts of this disease are: potatoes, peas, and beans.

This was due to inefficient drainage and prior soil conditions, making disease susceptibility and presence much greater. At the end of the trial, the BioFlora treatment resulted in 149 new unstable plants (down to 19.5%), while the Control concluded with 183 (increased to 25.7%). This is a 6.2% difference in the number of new unstable plants over the BioFlora test plot. These percentages show that the disease advanced at a higher rate in the Control field.

Also worth noting is the increased disease presence during the rainy season, as shown in Graph 1 and 2. With BioFlora products, the treated field was able to suppress the disease beyond the Control. The BioFlora plots also showed clusters of recuperating plants. These clusters indicate a positive disease recovery, which was absent in the Control field.

Overtime, recuperating palms in the Control test area had a higher rate of relapse and did not fully recover. The oil palms in the BioFlora test area showed signs of strong recuperation, including: multiple new fronds, green foliage, increased production, and vigor.

The objective of this trial was to increase yields and improve soil fertility in Guatemala. Specifically, BioFlora was tasked with increasing the number of bunches per hectare and the avg. weight per bunch of oil palm.

BioFlora® 0-15-15
contains a blend of nutrients designed to greatly enhance plant metabolism and nutrient assimilation. This product is also rich in oxygen, which increases microbial activity in the soil.

BioFlora® Boron-Zinc
is a balanced blend of two critical micronutrients: boron and zinc. These two elements work together to strengthen cell walls and aid in carbohydrate, protein, and auxin metabolism in many vegetable, tree, and specialty crops.

All products were broadcast manually around the weeded palm circle twice a year.

This mixture was applied using a Solo Knapsack around the weeded palm circle.

The results from the first trial indicated that adding Humega to a commercial fertilizer program would increase the amount of fresh fruiting bunches (FFB) each year over a program of standard chemical fertilizer inputs.

Surprisingly, these results were gained with only a single application of Humega in 2001, which was then monitored over the course of four years.

The results from the second trial indicated a few more important factors for oil palm growers.

However, the most agronomically and economically optimum rate for mature oil palms is achieved by reducing the commercial fertilizer program by 50% and supplementing with Humega. This ratio does cause lower yields, but the added cost savings to the grower more than cover the difference in reduced market value. This follows Treatment D.

Whichever option a grower chooses, they are still working to repair soils, and sustain oil palm cultivation for future generations.

Yield collection was done based on the estate practices and under the estate and research and development staff supervision (see list of conductors to the right). 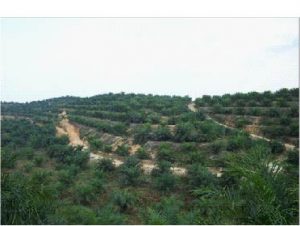 BioFlora was founded in 1972 with a goal to conceptualize, develop, manufacture, market, and deliver a proprietary product line to the agricultural community. Through our innovative products and programs, we provide solutions for our customers in both domestic and international markets. Today, we have over 30 unique proprietary products that benefit growers, retailers and consumers alike. Our organic and sustainable agricultural programs maximize the efficacy and efficiency of traditional agricultural inputs, while being mindful of their environmental impact.

Back to What's Happening